Your message was sent successfully

The Palace & The Botanical Garden

The palace and the botanical garden in Balchik, joined in an architectural and park complex, are a piece of heaven on earth and a must-see tourist attraction on the Bulgarian Black Sea coast.

The complex appeared as a summer residence of the Romanian queen Maria (1875-1938).
The palace was designed by Italian architects and construction works started in 1924. One of the first buildings was the queen’s villa “Tenha Yuvah” (“lonely, solitary nest”). In the coming years, new villas, an Orthodox chapel, a nympheum, inside Moorish-styled patios, a traditional Revival Period house and fountains, decorated with fine marble medallions with mythological characters were built. 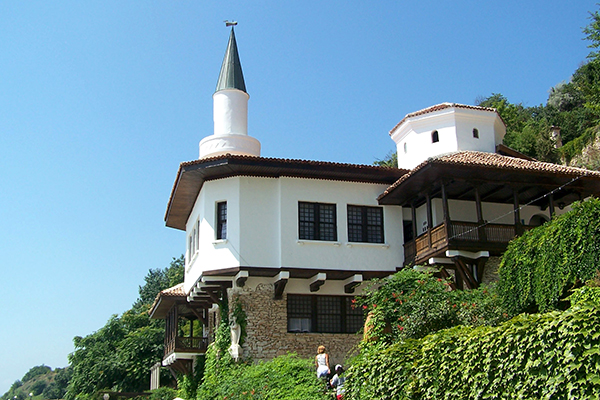 The complex is open to visitors all year round. The best time to visit is between May to October. The complex is open every day from 08.30 to 18.00. Entrance fee for adults – 6 leva, for children from 7 to 18 years old – 2 leva, children up to 7 years old – free. Visitors are also offered guided tours and various educational courses. 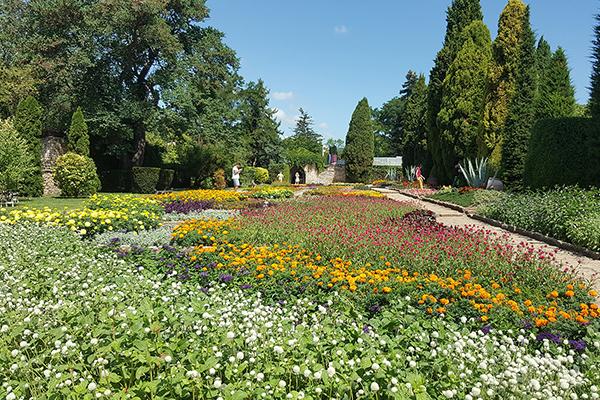 The entrance fee to the botanical garden is 4 leva for adults and 2 lev for children aged 7-18 years. The complex also offers other services, including wine tasting and accommodation.

Balchik’s Botanical Garden is the only one in Bulgaria, which has facilities for people with mobility and visual disabilities. 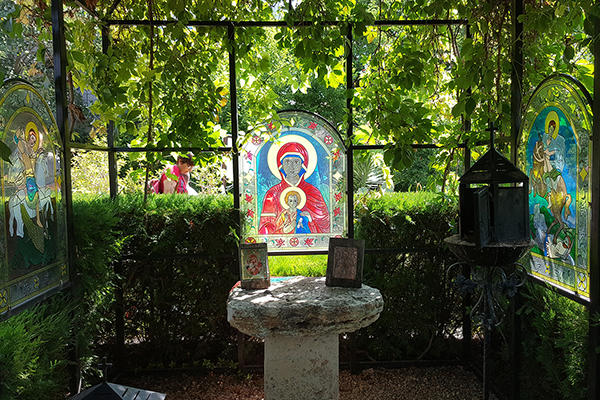 The architectural design combines Proto-Bulgarian, Gothic, Oriental and Moorish elements. Many gardens are created, which also bear the impact of different cultures, styles and beliefs. The credit for this eclectic style should be given to the queen – a follower of the Baha’i religion that praises equality between religions and unity of God, of faith and of the whole human race.
The residence was completed in 1936; Queen Maria died two years later.
As part of the residence, in 1926 the Swiss botanist Jules Jani designed and built a park complex. Twenty nine years later, the Sofia University “Saint Kliment Ohridski “ created at this place a botanical garden with an area of 65 decares. Today, it has more than 2 000 plant species from 85 families and over 800 genera. The collection of palm-trees, for example, includes 33 species, some of which more than 50 years old. Here you can see 200 species of trees, rare and exotic such as rubber tree, oriental raisin tree, paper mulberry, red juniper, ancient Ginkgo biloba, evergreen magnolia, etc. Of Interest is also the Metasequoia, which was considered extinct until during a scientific expedition in China a Bulgarian scholar found a living plant. The garden is world famous for its unique collection of large-sized cactuses, which is the second of this kind in Europe after the one in Monaco. It is open from April to October, spreading on an area of 1 decare. The collection of 600 specimens of giant succulents, some of which blooming only once in 100 years is also impressive. Among the most beautiful flowers in the garden are the water lilies and the magnolias, as well as the magnificently arranged collection of annual plants at the entrance.

The visitors to the palace and the botanical garden are especially interested in the chapel “Stella Maris”, the “Alley of wine”, the “Alley of ages”, the “Hanging terraces”, the tomb of Queen Maria, the “Garden of Allah”, the “English courthouse” garden, the “Garden of the cross-shaped water mirror”, the “Palace bridge and the boat garage”, the “Bridge of sighs”, the old mill, the “Silver well” and the numerous archaeological artifacts from antiquity and the Middle Ages. The palace is supplied with water from the springs “Byal Kladenets” and “Chatal chesma”. The villa where once the queen lived houses a museum exhibition, which displays her personal belongings, photographs and documents, as well as a collection of original paintings and icons; antique pottery found during archaeological excavations of Thracian mounds near Balchik and Revival Period weaponry. The hall that once served as the residence’s library is now a gallery. It displays paintings of Bulgarian and foreign artists. Often hosts: art expos, music & film festivals, weddings, interactive games.